Salem-in-Ladue United Methodist Church lends a powerful narrative to the rich history of St. Louis, beginning with the story of its founder, Ludwig S. Jacoby.  He was born in 1813 to devoutly Jewish parents in the Alt-Strelitz area of Mecklenburg, Germany. Jacoby was baptized into Christianity by a Lutheran pastor in 1835 and immigrated to the United States around 1838.  After becoming a Methodist in Cincinnati, Jacoby married a fellow German immigrant, Amalie, a Catholic-turned-Methodist.

The Methodist Church of Cincinnati sent Jacoby to St. Louis as a circuit rider in 1841.  Upon arrival, he rented an “old, abandoned Presbyterian mission church” on Seventh and Biddle Streets and began holding worship services.  With 22 members, Jacoby’s church became one of the first German Methodist churches west of the Mississippi. In 1842, the little congregation purchased property on Wash Street, near Eleventh Street, and built their new 32’ X 50’ church.

In 1873, the congregation built a new church at the corner of Sixteenth and Wash Streets, which became known as the “Cathedral of German Methodism.” To provide for other neighborhoods, the church began other branches of Methodist Episcopal churches throughout St. Louis during the last half of the 19th century.  The home church on Wash and Fifteenth served as the “mother church” for its branch churches as well as its outreaching missions.

The congregation again relocated in 1905, building a new church at Page and Pendleton. The new Salem Methodist Episcopal Church held revival services in addition to its regular worship.  The church offered groups such as the singing Salem Glee Club and the Friendship Club, made up of young women who worked in the city.  The women who belonged to Salem’s IAM Society provided aid to St. Louis poor and, during WWI, children of Europe.

Yet another new church was built at Kingshighway Boulevard and Cote Brilliante Avenue in 1925.  The congregation faced losing their church during the Great Depression of the 1930s and dedicated themselves to saving their place of worship.  Each organization within the church fund-raised for the “Building Fund” and the “Save the Sanctuary Fund.” Even the youth joined the effort by putting on a pageant to “Save Old Salem.”  Due to the resolve of its members during those hard years, the church prevailed.

In 1958, Salem moved to its current location on the northeast corner of Lindbergh Boulevard and Daniel Boone Expressway (now Hwy 40 / I64) in St. Louis County. The congregation first built a chapel for its worship services, which was followed by a series of building-addition projects.  Early educational classrooms and a fellowship hall preceded the church’s large sanctuary and office space.  The most recent addition, completed in 2005, houses Salem’s multipurpose room / gym and an entire wing of classrooms for Salem’s preschool, Sunday School, and youth activities.  Now boasting large membership, the thriving, mission-oriented Salem-in-Ladue United Methodist Church continues its long heritage as a church home for the people of St. Louis, where all are welcome.

In 2016 Salem United Methodist Church and The Connection United Methodist Churches joined together in ministry. Since that time we have continued to share the extravagant love of God with our community through worship, learning, and serving. “Community is important,” said Rev. Terri Swan. “We need each other. At Salem and The Connection we are better together! We are excited about where we’ve been over the past two years, and we can’t wait to see where God will lead us in the coming years.”  Check out our story. 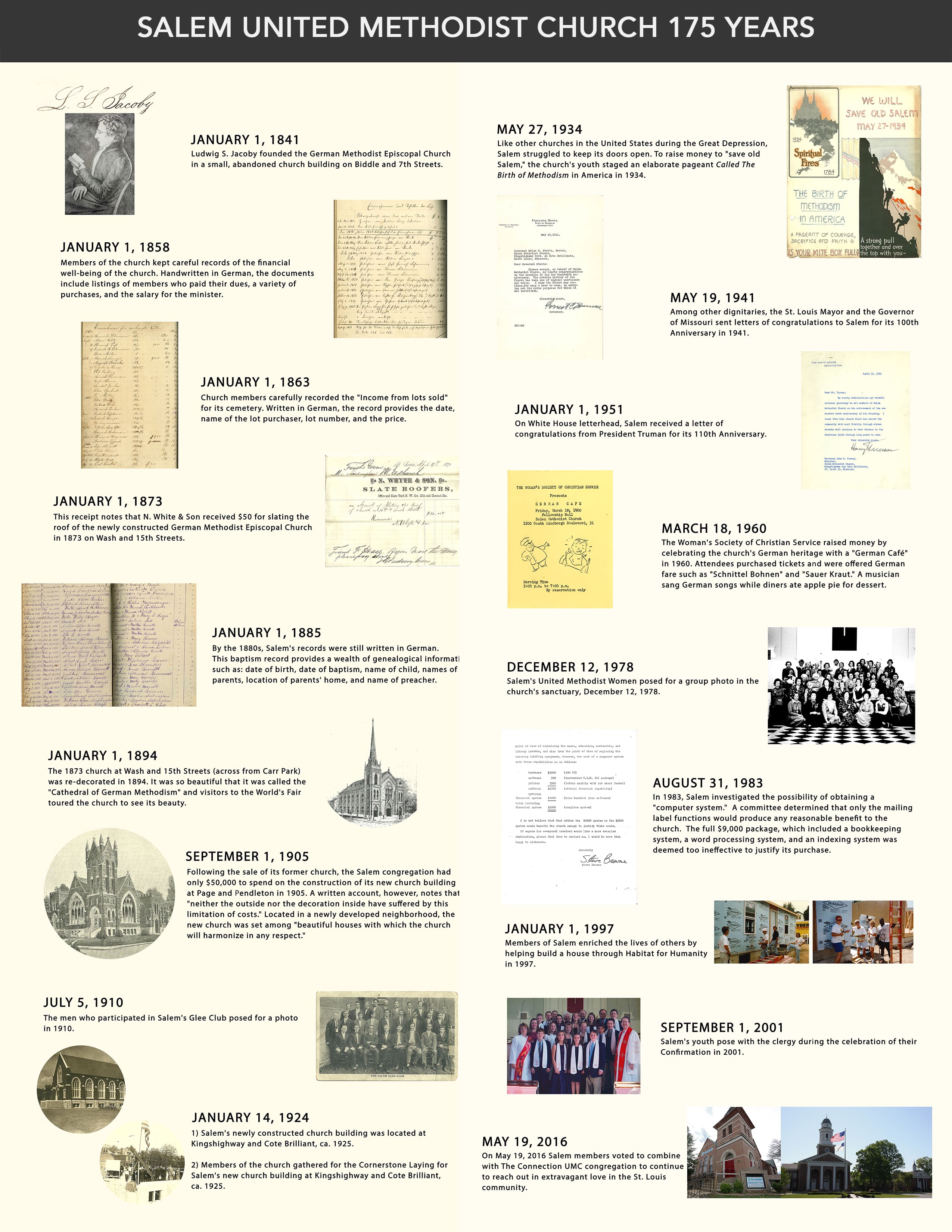